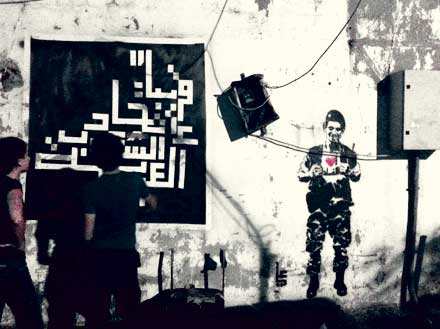 Check out this interesting blogspot by Pascal Zoghbi on the blog 29letters.wordpress about how a collaborative graffiti project by Ganzeer and Lebanese graffiti artist Ali was quickly and thoroughly removed by Lebanese police in Beirut. One stencil condemned Lebanese police’s corruption, while the other called for Arab unity.

The photos prove that art censorship is still alive and kicking in the Middle East, even in the (imho) cooler and more sophisticated Beirut art scene. The blogger notes that this is the first time for graffiti to be censored so quickly in Beirut, presumably because one of the stencils depicted a Lebanese policeman wearing a t-shirt that reads ‘I Love Corruption’.