The Revolution Continues… And So Does Graffiti

This amazing mural of the injured protesters of November 19 is on Mohamed Mahmoud Street, on the wall of the AUC Main Campus, which saw the heaviest battle between protesters and police soldiers ten days ago

Once again, graffiti has returned to the streets of Tahrir and the Mogama’ building as Egyptian demonstrators flooded back to the Square on November 19th. The street art covers layers of previous graffiti on the walls of Mohamed Mahmoud Street, only this time the tone is more sombre, calling for the freedom of jailed activists, commemorating those who lost their eyes or died during the November 19 protests, and denouncing the regime for the atrocities and injustice it is responsible for. 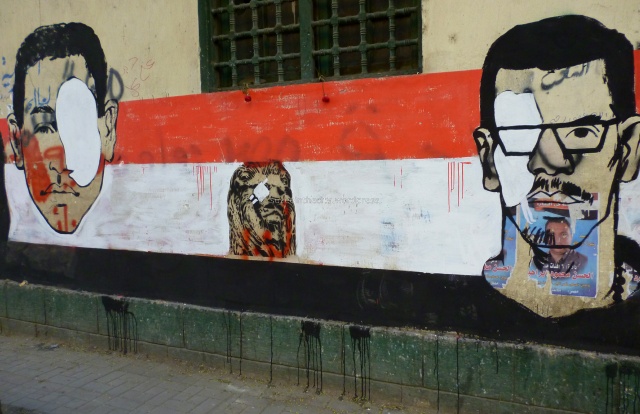 The wall carries eight faces of those injured during the protests. The real number of those who lost their eyes during the latest waves of protests is estimated at over 60 people.

The revival of the Tahrir protests has inspired these many artists to reclaim the walls; some are veterans of Tahrir such as Hosni, Hany Khaled and El Teneen. Others are new, and not concerned with leaving their names as they are with getting their message across.

The revolution may not be tweeted; but it may be recorded through graffiti. 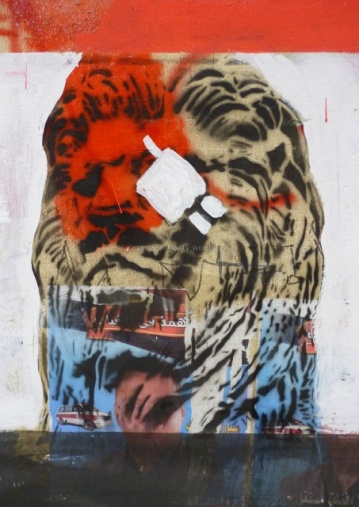 Yosri Fouda once again gets the graffiti treatment

Dance to the tunes of the revolution, Not emergency law 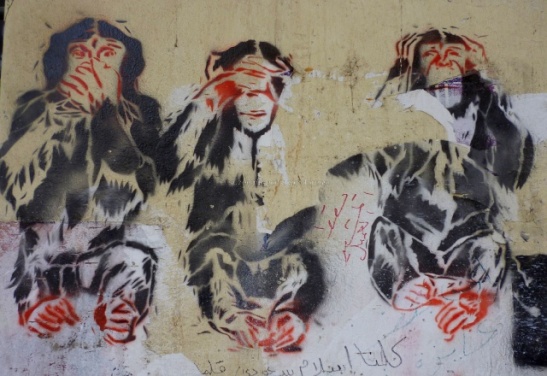 The Hear/See/Speak No Evil Trio

Graffiti of activists Alaa Abdel Fatah and Mina Daniel side by side. The first stencil calls for Abdel Fatah to be set free, while the second states ‘We Are All Mina Daniel’, inspired by ‘We Are All Khaled Said’, the facebook group that helped launch the January 25th protests.

Graffiti of Khaled Said’s face next to it ‘Khaled Mesh Said’ or Khaled Is Not Happy. It’s sad to see his face back on the walls next to those of other dead and injured protesters. 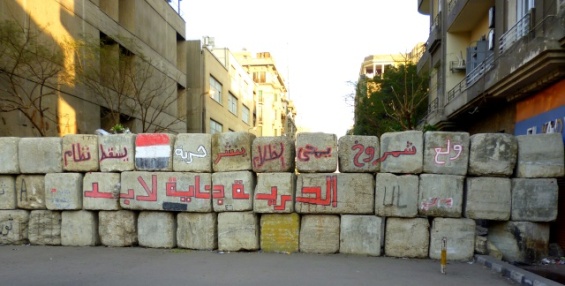 These blocks of stone block Mohamed Mahmoud Street at the AUC Greek Campus Library. Behind it and on both sidestreets, APCs and armed soldiers laze about. The wall reads ‘Freedom Must Come’

Your Silence is Killing Us, it reads. Above a neglected blanket on the corner of Mohamed Mahmoud Street

Graffiti of Alia El Mahdy (the nude revolutionary) &Samira Ibrahim, who is taking SCAF to trial over her being subjected to virginity tests in March. The text roughly translates to Samira was forced to take her clothes &be subjected to a virginity test by soldiers, with zero public or media interest. Alia El Mahdy took off her clothes willingly and her nude photos were viewed by 3million.

Graffiti stencil reads ‘Even if he lost both eyes, he’ll still be a lion. Long Live Egypt’s Lions’ 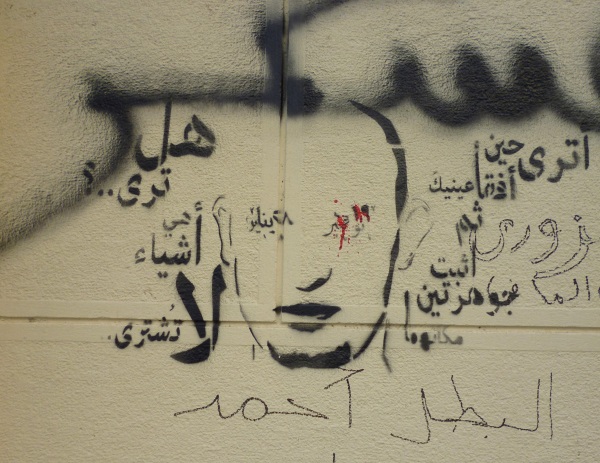 Graffiti of Ahmed Harara, a protester who has lost both his eyes in Tahrir, the first on November 28, the second on November 19.

‘The Revolution of the grandsons will bring back the glory’ 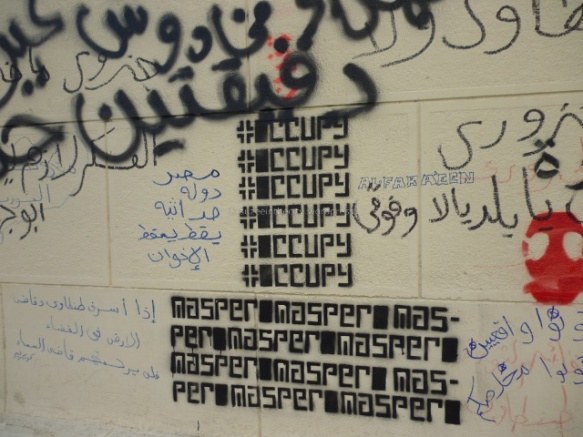 On the corner of Mohamed Mahmoud Street, green mural reads ‘Mosheer’s Martyrs Street, formerly Mohamed Mahmoud’. Next to it the handcuffed fists read ‘Freedom Must Come’

Mural by Hosni: ‘Fill in the dots: [expletive 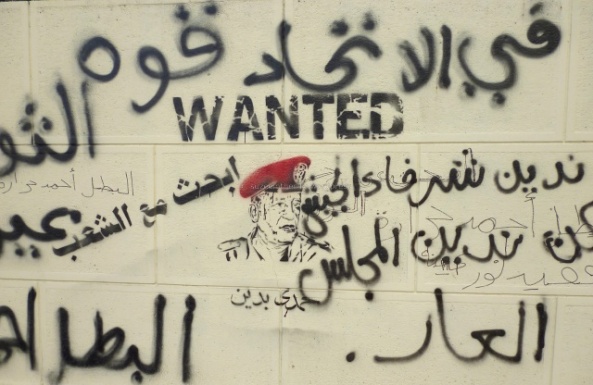 Graffiti of a cow on Mohamed Mahmoud Street, below it is a song. But I’ll need your help translating it. 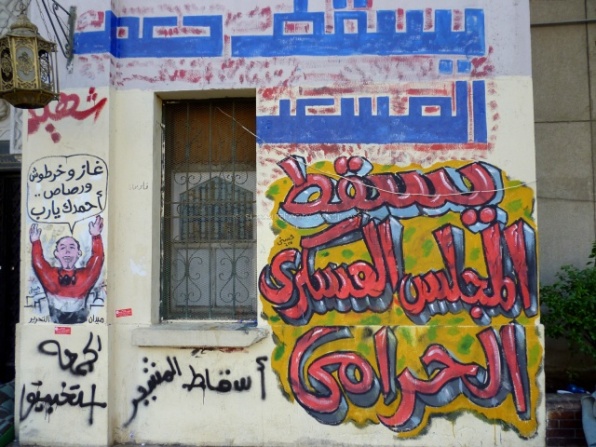 ‘Down with the Thieving Military Council’ mural by Hosni.

Next to sleeping protesters, the mural by Hosni reads ‘Tear Gas and Bullets, Thank God!’ 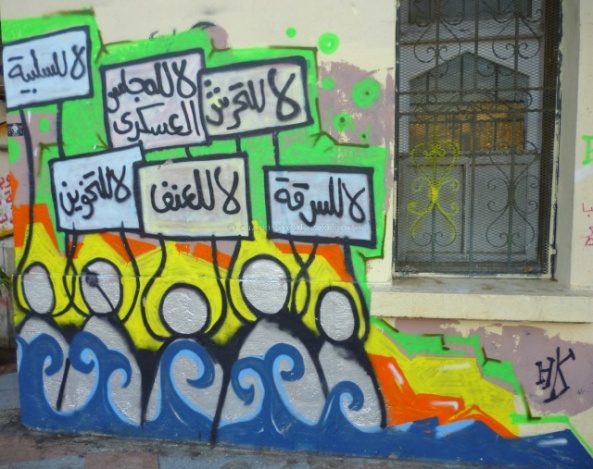 Mural by Hend Kheera and Hany Khaled, next to the wall where Khaled had made a mural during the July 2011 sit-in. Talk about Deja Vu. 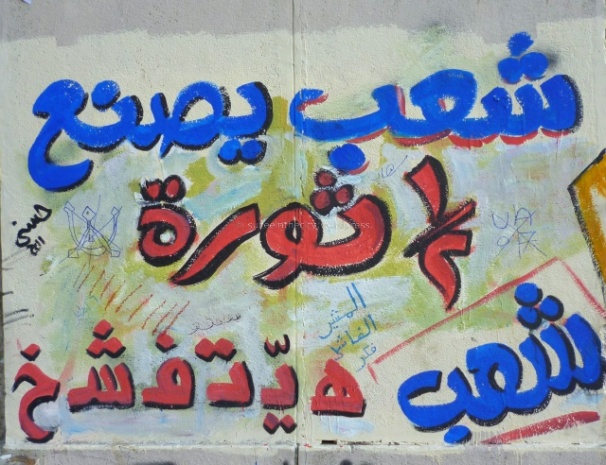 No Reconciliation: collage of faces including Khaled Said, Alaa Abdel Fatah, Mina Daniel and Others 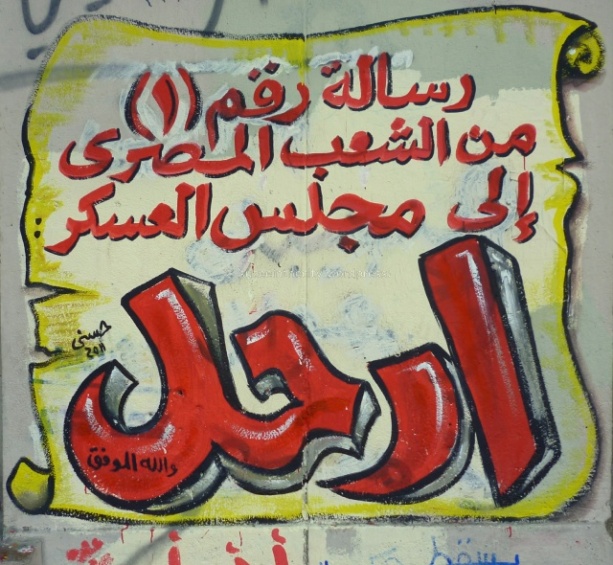 ‘Statement Nr.1 from the People to SCAF: LEAVE’ 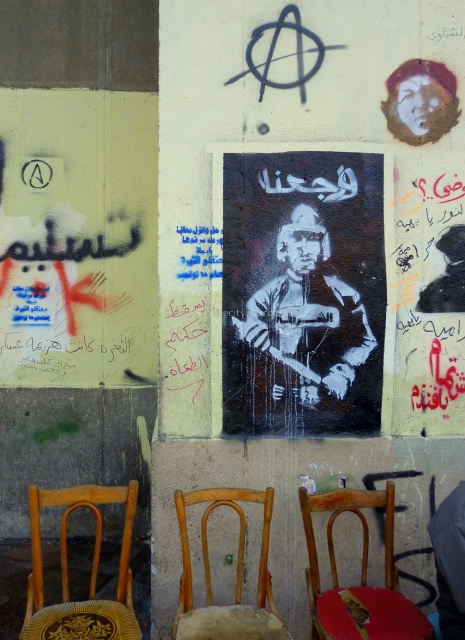 Below a stencil of Che Guevara, the baton-wheeling Policeman reads ‘We ARe Back’

13 Responses to The Revolution Continues… And So Does Graffiti