7orreya: Graffiti Exhibition on Freedom of Expression in Cairo

No matter how seasoned and jaded you are, it’s always a shock to see the ultimate Egyptian symbol of violence and oppression – the police state- on a pair of naked legs or on the back of a dirty, sodden toilet in a decrepit room. But that’s exact what 7orreya does.

This exhibition featuring the works of Egyptian artists Hani Rashed, Ganzeer, Ammar Abo Bakr and Ahmed Hefnawi challenges our concept of freedom of speech and censorship, aggressively reminding us of the past three years of battles fought and lost, and the absolutely vital role that Cairo’s graffiti has played in documenting history and fighting state fascism. The tone of the artwork shows a significant shift from the post-Jan25 exhibitions of optimism and ownership over the country’s future; instead you walk away with an overwhelming sentiment of defiance, bitterness and righteousness.

Held on the first floor of the Viennoise Hotel (off Mahmoud Bassiony Street) in Downtown Cairo between December 23rd to the 29th, the exhibition took over the entire space with installations and wall graffiti, offering an interactivity aspect where visitors were encouraged to add to the graffiti with their own messages. The result was a chaotic representation of the revolutionary slogans, sarcastic commentary and reminders that have filled Egypt’s rhetoric since January 25th.

One of the highlights of the exhibition was Hefnawi’s tear gas gun, encased in glass and capturing the movement of tear gas smoke with cotton.

Another was Ganzeer’s ‘Clash of Forever’, an old-school arcade game featuring kitsch gamer music and a rolling handle that reveals video-game-style faces of the different villains and sides of Egypt’s battle poles.

Another stand out piece was one of Hani Rashed’s installations, the solitary slab of rock carrying Omar Picasso’s graffiti ‘Elli Kalef Ma Matsh’ [He who delegates never dies] with the half face of Mubarak and Tantawi, a graffiti that was replicated and changed over the years to reflect the different faces of Egypt’s dictators.

This piece stood solitary in a room on its own, with minimal lighting and an overwhelming atmosphere of defeat. Together with the rest of the artwork, it gave insight to everything lost over the years, the depression and political fatigue of many in the artist community who’d supported the January 25th revolution.

Hani Rashed told me that 7orreya is a taster for the artists’ plans to launch their own museum of revolutionary graffiti, an idea that has been floating around for years.

Given the number of exhibitions and projects dedicated to exhibitions that have excluded the street artists themselves, and the oft-misrepresentation and skewing of their messages, it’s fantastic that many in the community want to create a retrospective and archive that is true to their cause and does not exploit their work for others’ profits.

Rashed told me that he was inspired to create the miniature walls of graffiti when he came across government-printed graffiti books with censored content. The fact that a book on graffiti was published by a governmental entity is ironic as it is; but Rashed found that anything containing anti-regime messages (which, let’s face it, is about 99.99% of the graffiti created since Jan25) was censored and excluded from the books.

Rashed’s counterattack was to take the images from these books to create his artwork. Others, I assume, were sourced from other graffiti artists and sources.

Even though the exhibition was very short-lived, it was much-needed and gave me hope for the future of street art in public spaces.

The fact that the walls were scribbled with defiant, lewd messages and graphic images was to me a challenge to the state, a reminder to the public of the volatility of graffiti in its honest, direct visual message, a power that no oppressive state can completely stifle. 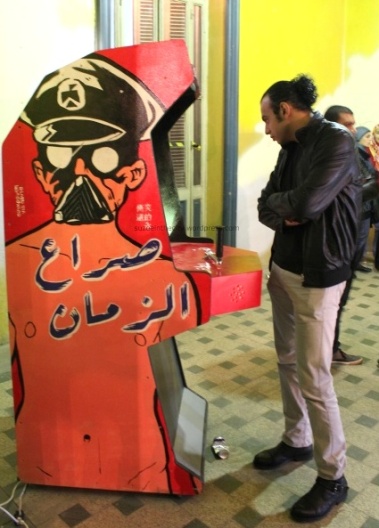 Read this review of the exhibition by Ahdaf Soueif (in Arabic) as well as Gilimag’s photo essay. 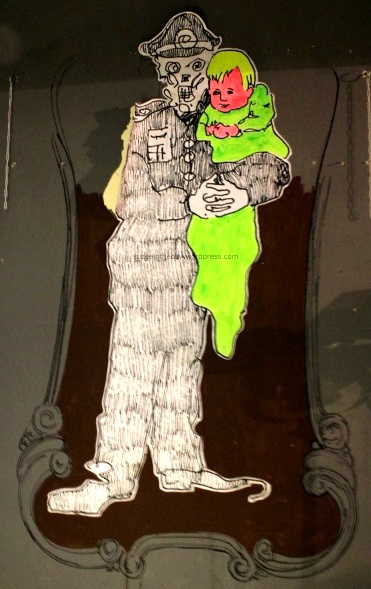 3 Responses to 7orreya: Graffiti Exhibition on Freedom of Expression in Cairo